Ms. Gilbert always knew she was an artist, but it took decades to give herself permission to call herself one. Until then, art played an important but secondary role in her life. Inspired by nature and curiosity, Debbie observes and uses color, form and texture to inform her work. She gravitates toward the dimensional and often uses sculptural elements in her mixed media projects.

Photography has always played a role in Debbie’s artistic endeavors. “It is a transportable medium, therefore lets me capture images at any time. I enjoy photographing natural as well as man-made objects.” In 2005, Debbie’s photojournalistic exhibit was featured at the Stratford Library. It told the story of her trip to China, to bring back her adopted niece, “As a writer, it was natural for me to incorporate a written piece to accompany the photos. It gave the exhibit much more depth, so viewers could really get inside the experience. I have since married my art with written commentary numerous times.”

Continuing to experiment with different media, Debbie discovered fiber and assemblage. “The materials allow you to create three-dimensional projects such as felted wool, knitted or crocheted wearable art (handbags and luxurious scarves), silver and beaded jewelry and other sculptural works. Being a recycler at heart, assemblage allows me to employ found objects, using them in new and creative ways. I save all kinds to things others throw away because I see a new life for discarded things. I “reassemble” these things to create one of a kind art, while saving the planet.”

Ms. Gilbert has exhibited in juried shows at the Barnum Museum, the SPAG Gallery, The Gallery of Contemporary Art at Sacred Heart University, Ridgefield Guild of Artists, Housatonic Museum of Art and the Bromfield Gallery in Boston, among others. She has been awarded prizes for her ink drawings and photographs. Debbie has also been commissioned for photos in Positive People Magazine, for the cover of “The Best 10 Minute Plays for 3 or more Actors, 2008 edition,” and for a generational themed sculpture at the Jewish Community Center of Greater New Haven.

Ms. Gilbert founded the Stratford Arts Guild in 2006 (renamed the Coastal Arts Guild of CT in 2014) and currently serves as its Treasurer.

A native New Yorker, Debbie moved to Connecticut in 1983 and resides in Stratford CT with her husband Jim. Her son Jared works for the Disney Channel in LA. Her son David lives in NYC and works in management in the music business. 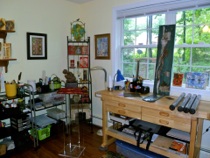 *A note about my choice of name:

I committed to my husband and added his name to mine. It unites me to this family; my children share this name.

My artistic talents however come through my own family genes. My choice to sign “Gilbert” to my artistic works is in recognition of this heritage and to honor the memory of my late father, who never got to see me blossom.